Rugrats has an ever present contrast between the whimsical adventures of the babies and the incredibly mundane lives of the grown-ups: paying taxes, grocery shopping, and playing flavorless board games.

The adults play a game called Neurosis, which is like “Life” but with twice the rules and none of the bright colors. They desperately cling to finishing the game despite the junior terrorism of Angelica’s “scheme of the week”. Grown-ups will do anything that promises to deliver them from the soul crushing futility of their day to day suburban lives.

Unfortunately, their board game will give them no satisfaction, they really ought to be playing something like Ticket to Ride for that.

“Barnyard Chess” comes up in more than a couple episodes, how it differs from normal chess is never totally clear. Doug and Skeeter often play to pass the time, but in the episode Doug’s Fat Cat he plays it with his sister Judy. The show plays to a lot of typical archetypes–the best friend, the school bully, the haughty-er than thou sister, etc–and it would be easy to think the characters are two dimensional.

But we routinely see depth in Judy and Doug’s relationship. She may be dramatic and focused on her “art”, but she still has time for her brother, whether that means getting him out of a jam or just sitting down and playing a board game.

Smart people play chess, apparently that’s a whole . . . cultural stereotype. Chess was designed before people thought board games could be fun, so the goal of chess is to show how much smarter your are than your opponent. So you can bet that boy geniuses line up to play the game.

Dexter’s Lab uses chess as a stand in for soccer to play the usual “soccer mom” trope. Just because a boy genius doesn’t play soccer doesn’t mean that his mom won’t be on the sidelines in face paint making everyone feel uncomfortable.

“Art though feeling it now Mr. Crabbs?” When you need to feel young and hip, nothing compares to playing a pen and paper RPG with a Sponge and Starfish.

Mr. Crabbs just isn’t “feeling it”. In a mid-life funk, he turns to Spongebob to rediscover his inner child. P&P, a nautical role playing game, pops up in a quick sequence of nonsensical activities and delivers a low hanging punchline.

Interestingly, the episode nestles a tabletop RPG between a coin-op hobby horse and a kiddie pool. Each activity is it’s own kind of make believe, so while it’s easy to dismiss Spongebob as a drug-induced fever dream, he’s making an interesting point. The key to connecting with your inner child is through imagination.

While Jackie Chan oversees a valuable relic being transported in the secret safe aboard a cruise ship, he brings along Uncle, Jade, and Tohru.While Jackie works to keep the artifact safe, his family can take a bit of a vacation.

Tohru also brings along his mother, who is constantly at odds with Uncle. Uncle is actually prepared to swim back to shore rather than spend the trip with Mama Tohru. . . until she mentions mah-jongg. Rivalry sparks and the two elders spend the cruise trying to outdo each other in a variety of games.

Jackie Chan Adventures, at times, gave us a reasonably authentic look at Chinese-American culture, so it felt natural to have mah-jongg featured strongly in an episode. Not only do both Uncle and Mama Tohru claim to be experts, but they back up their claims with awards won in competitive circuits.

When Dag and Norb are paid a visit from their backwoods cousin, they’re tasked with treating him with extra consideration. While Dag isnt particularly hospitable, he does treat his photorealistic cousin to the “best board game ever”: The Limited Gold Edition of El Grapadura and Ladders.

Dag’s more the type to obsesss over video games, as the episode starts with him playing a lumberjack simulator instead of helping clean house. Still, when extended family comes to stay, board games are the activity of choice, even for beavers.

Tensions run high when Jenny and her friends play some form of Monopoly. Brad and Tuck cheat, but Jenny wins because she’s an insufferable rules lawyer and takes advantage of a technicality. Everyone’s a jerk, everyone is angry, and Jenny has to go rescue someone from a garbage planet beyond Jupiter. Brad and Tuck aren’t done being petty, though, and tag along.

The gang has to put aside there pettiness to fight a tri-villain team up. You’d think the lesson would be how our heroes are heroes because the don’t let pettiness get in the way of saving the day. Not true. They only put aside their petty complaints at the last critical moment, and, even then, only briefly.

What Jenny wants more than anything else is to live life like a normal teenager. The episode paints the protagonists as petty to the point of self harm, so I think the message is pretty accurate. 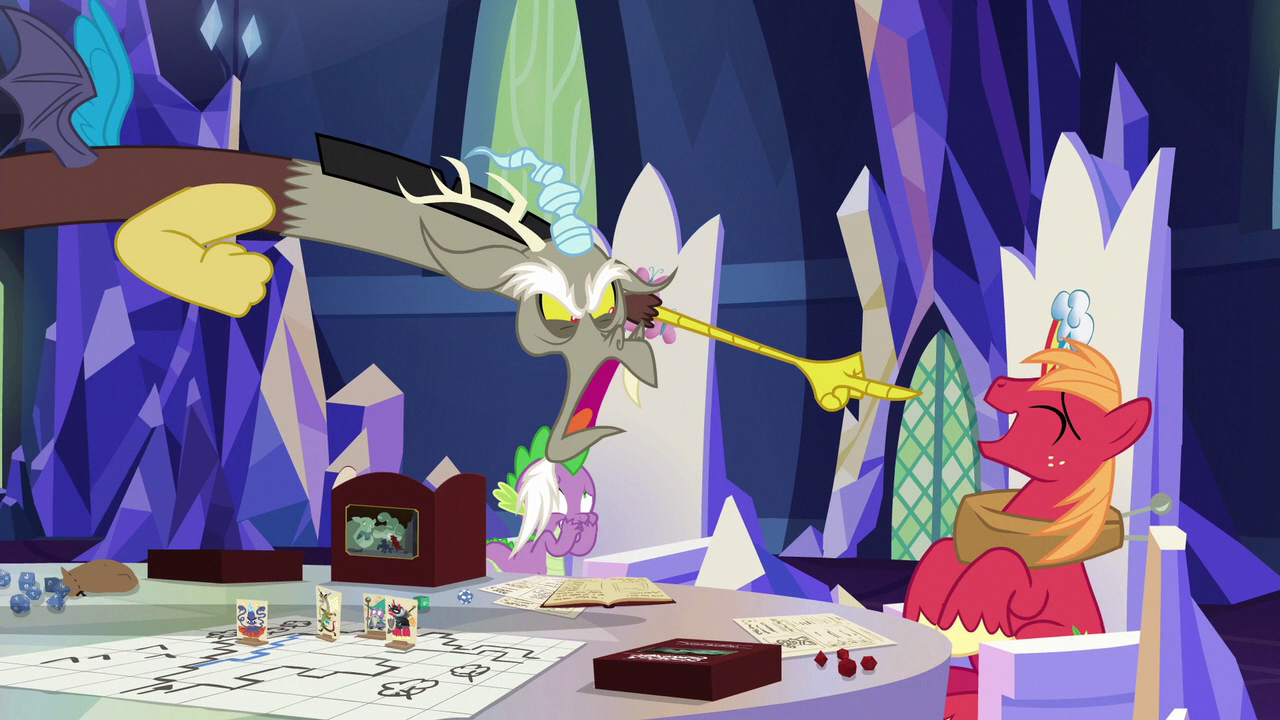 Given a free evening, Discord finds his usual companions occupied and decides to grace the “sidekicks” with his presence. Big Mac and Spike bring Discord in on their plans for an evening of “Ogres and Oubliettes”, Equestria’s off-brand D&D. Discord dismisses them and their game out of hand, but a few moments into the game, he earns ridicule for making poor game choices.

Here’s a tip, maybe don’t poke fun at a god of chaos during an RPG session. Discord pulls a Jumanji, and sucks Spike and Big Mac into a world where the game has come to life, and is ready to kill them.

I feel My Little Pony really captured the emotions and dynamics of some RPG group’s I’ve encountered. Snide comments can cut deep, and emotions can overflow. Eventually, Discord comes to realize that he’s not “too cool” for the sidekicks, while Big Mac and Spike realize they were a little too hard on Discord. Reconciling their frustrations and hurt feelings, all of them are able to enjoy the game more together than they could without each other.

That’s an important lesson in escapism. Games let us rewrite our social contracts, but that doesn’t give us a free pass to be jerks. I think that’s a great takeaway message, and something that many RPG groups struggle with. 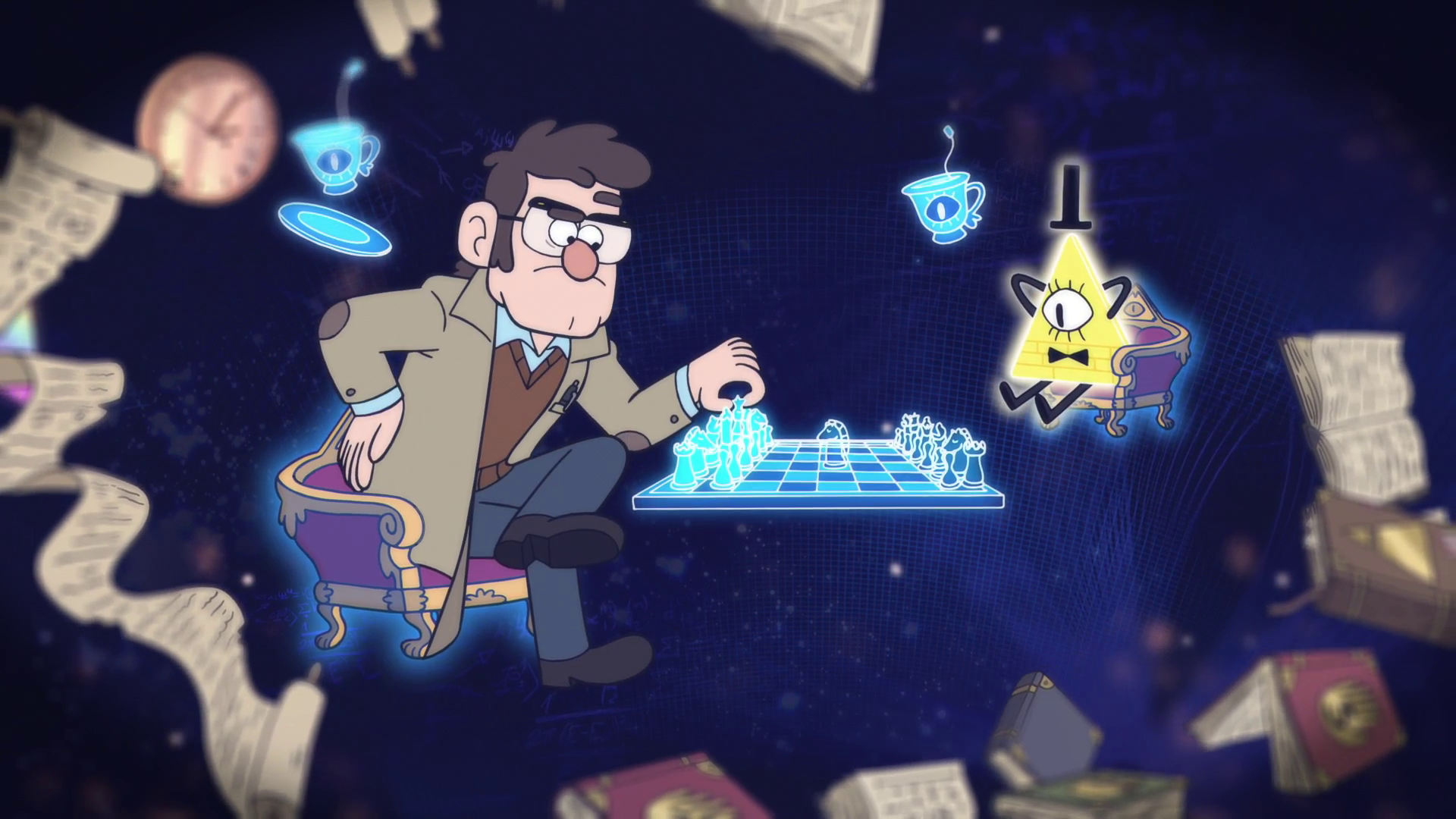 Bill Cipher is the big bad of Gravity Falls. A nigh omnipotent deity of pure chaos, Cipher is bound by an inscrutable system of rules and limitations. Mostly though, Bill needs to make deals with humankind to gain access to reality.

Cipher befriends Stanford, a lonely intellectual, by offering knowledge and stoking his ego. Over time, their partnership grows, and we see them engage in a round of chess.

Chess is a great tool to express their relationship. Ford, looking for companionship enjoys what, to him, would be intellectual stimulation shared by equals. From Cipher’s point of view, chess  mirrors his life; to get what he wants he needs to navigate complex rituals and, more importantly, he needs to get an opponent to sit down with him.

Adventure Time revisits Card Wars after Jake has become a father. Spending time with his daughter Charlie, he begs her to play doubles Card Wars with him at an upcoming tournament. She prefers Tarot cards, but, after Jake begs, she agrees to play one game in exchange for one of his bones.

We’re given a glimpse into Jake’s history of being violent and vindictive when losing a card game. He’s a father now and he’s lost track of how old he is, maybe he’s almost 40. According to Jake, 20’s are for regretting, 30’s are for being dignified, and 40’s are older than he ever wants to be. He want’s to unpack and bury his last decade before embarking on the next one.

Which means coming to terms with himself in a card game.

Charlie plays a single game, and then leaves. No amount of bones will entice her to stay, and Jake attempts to continue the tournament alone. Without the influence of his daughter, he quickly succumbs to the impulse to win at all costs (including at the cost of his dignity).

We watch him struggle, while Charlie uses the bone to peer into the future and gain mysterious wisdom. Afterwards, she realizes that she was a total “wan” to her dad, and return to help him. Jake is barely able to hold it together until Charlie helps him to be content. They don’t win the match, but Jake is able to bury his 20’s.

Notice any board game references we missed out? Let us know on our Reddit Forum!